Medical terminology can add to the confusion of a situation when a patient is dealing with health issues related to acute or chronic kidney disease. Below are some common words and definitions that can help aid patients in their understanding of kidney terminology as it relates to their health diagnosis.

nb The term “renal”, from the Latin word renes meaning kidney, is often used interchangeably with the word “kidney”.

ACR (Albumin:Creatinine Ratio) is a urine test (into a small sample pot) best done in the morning. It helps check if the nephrons (kidney filters) are damaged and leaking albumin, which is a type of protein normally in the blood. (See also Albuminuria and Proteinuria) This test contributes to the Kidney Health Check

Acute Kidney Injury (previously known as Acute Renal Failure) is a sudden loss of kidney function which is often reversible. However, sometimes it can lead to Chronic Kidney Disease. Causes of acute kidney injury can be from dehydration (most common), a toxin or illness that damages the kidney, or a blockage such as a kidney stone. Dialysis is sometimes used but is stopped once the kidney recovers.

Albuminuria occurs when a protein called albumin, which is normally in your blood, is found in your urine. When the nephrons (kidney filters) are damaged and the kidneys aren’t working as they should, they let this protein leak into the urine. (see also Proteinuria)

Microalbuminuria is when only a small amount of this protein has leaked into the urine. (Micro = small)

Macroalbuminuria is when a larger amount of this protein has leaked into the urine. (Macro = large)

Chronic Kidney Disease (commonly called CKD) is defined by altered kidney structure (shape) or reduced kidney function lasting more than 3 months. There are many different causes of CKD including diabetes, inflammation in the kidney and high blood pressure. There are 5 stages of CKD based on the level of function of the kidneys. If CKD progresses, then it can lead to End Stage Kidney Disease. (Also called Stage 5 CKD or Kidney Failure)

Creatinine is a waste product from the breakdown of muscles and is measured using a blood test. When the kidneys are working well, creatinine is filtered out of the blood and into the urine. When the kidneys aren’t working as well as they should then the amount of creatinine builds up in the blood. It is used to calculate the eGFR (Estimated Glomerular Filtration Rate) which is like a percentage of kidney function.

Dialysis may be used if your kidneys stop working properly. During dialysis, a different filter or machine does the kidneys’ job by filtering out the waste and excess fluid. Dialysis may be done in a hospital or at home.

Haemodialysis is where the blood is filtered through a dialysis machine and returned to the patient. Sometimes this occurs at home or at a dialysis unit at a hospital.

Peritoneal dialysis (PD) is a filtering process using the peritoneum in the abdomen. The peritoneum is a thin sac that surrounds the abdominal organs.

eGFR (Estimated Glomerular Filtration Rate) is a blood test result based on creatinine and your age and indicates the how well the kidneys function. The result is like a percentage of your kidney function compared to normal. It helps work out the stage of CKD. 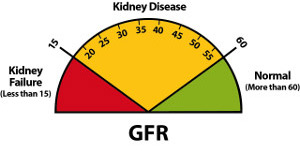 Kidney Health Check combines three tests your GP can do to check (screen) for kidney disease. These include having your blood pressure checked, having a blood test measuring your eGFR (Estimated Glomerular Filtration Rate), and a urine test for your ACR (Albumin:Creatinine Ratio). Together, these three tests indicate how well your kidneys are working.

Kidney Biopsy (also called Renal Biopsy) is a test sometimes used to find the cause of Acute Kidney Injury or Chronic Kidney Disease. The test involves using a needle under guidance to collect small samples of a kidney. It is performed under local anaesthetic using an ultrasound machine or CT scanner.

Kidney transplant (also called Renal Transplant) is a treatment option for End Stage Kidney Disease. A transplant can come from a live donor, such as a partner, friend or relative, or a deceased donor who decided to donate their organs after death.

Kidney Ultrasound (also called Renal Ultrasound) is a test using an ultrasound machine which uses soundwaves to form images of the kidneys and is used to help check for the cause of kidney disease.

Nephrologist (Also called a Renal Physician, Kidney Specialist or a Kidney Doctor) is a doctor who specialises in kidney health. Like the word ‘Nephron’, the term is derived from the Greek word Nephros meaning kidney.

Nephron is the basic structure in the kidney that filters the blood. The term is derived from the Greek word Nephros meaning kidney.

Proteinuria is where protein is found in the urine usually because filters (Nephrons) are damaged and leaking. The most common protein found is called albumin. (See Albuminuria)

Supportive Care is a treatment option for End Stage Kidney Disease. It involves using medications and treatments other than dialysis to treat symptoms that may occur. It is used when dialysis is thought to be too burdensome.

“If you can’t explain it simply, you don’t understand it well enough”

Get in touch with Dr Baer and his team

Dr Baer practices from multiple medical facilities in Queensland. Find the location closest to you.

Are you a GP?  Get connected with Dr Baer today.